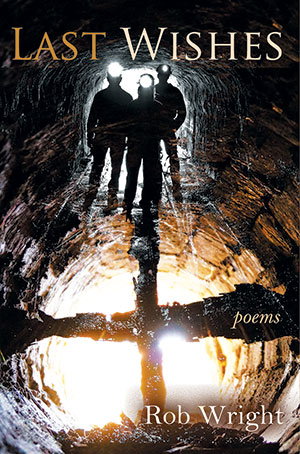 Rob Wright’s Last Wishes is eclectic and delves into mining grit and lifestyle as fluently as it does into spiritual hopes and despairs, or the mind’s lucidity and aberrations. Well-traveled in time and place, Last Wishes’ culturally diverse characters and scenes—framed in Philadelphia, Fort Meyers, Manhattan, São Paulo, Kowloon, Majdanek, or elsewhere—are memorable or miserable. Accounts of ghosts and hauntings, imagined or real, include heart-stopping witness narratives of the Holocaust and other atrocities. This is a seasoned inaugural collection—a special honoree for the 2019 Able Muse Book Award.

Rob Wright’s poems in Last Wishes ache with a quiet, exquisite music. Whether at the edge of the forest, or before a mirror regarding his own face, or at the limit of what a son can feel for his father, Wright calls us to join him on his search for order and meaning, even as he questions what he finds: “The shell that holds all grief and memory,/ in chains of molecules that make a mind,/ will turn back into atoms, hungry, free./ We’re spirits caught inside our skin and hair—/ ephemeral our dramas, spun from air.” Such is the breathtaking beauty of Last Wishes, to long for what seems so close and yet, in the end, we cannot know.
—Rafael Campo, author of Comfort Measures Only: New and Selected Poems

One of Wright’s gifts is the age-old poetic magic of conveying beauty in what might at first appear to offer up nothing but ugliness. . . . It is fitting that one of the titles here is “Prologue for an Imaginary Play,” because Wright’s poems often are, in essence, little plays. The landscapes here are never static; like a photographer, or a cinematographer, Wright captures his subjects at their most revealing in a flash. Scenes are arranged and rendered at the moment of greatest drama and tension.
—Alison Hicks (from the foreword), author of You Who Took the Boat Out

The first poem in Last Wishes describes in evocatively exact and gritty detail a landscape of abandoned mines, and ends with the poet’s mind reaching out toward the miners who once worked there: “I thought/ how hunger drives a man to crawl beneath/ the brittle crust that shuts out sun and sky.” Moments like this are repeated again and again throughout this obsessively compelling book—a surface (often enough a fairly bleak one) is described in richly precise detail, and out of it pasts, ghosts, the dead, revenants and spectral appearances emerge with a kind of beckoning, unreachable clarity that is at times wistful and at times brutal. If these poems were photographs most of them would be in grimmest black and white, but they would make a most marvelously enthralling exhibition.
—Dick Davis, author of Faces of Love: Hafez and the Poets of Shiraz

After working for three decades in film production, Rob Wright has now chosen to spend his time writing. He currently serves as associate fiction editor for Able Muse, and has been awarded three Fellowships in Literature from the Pennsylvania Council on the Arts. He has twice been nominated for the Pushcart Prize, and has published fiction, reviews, and poetry in Able Muse, Angle, Big City Lit, the Evansville Review, Measure, Rattle, String Poet, and the Schuylkill Valley Journal. A finalist for the Howard Nemerov Sonnet Award, he recently was awarded the Frost Farm Prize for Metrical Poetry and was honored to give a reading at the home of Frost in Derry, New Hampshire.

Signup for book & other news!